In 1965 Gordon E. Moore was the director of research and development at Fairchild semiconductor. He was asked to make a prediction of how the semiconductor industry would develop in the next 10 years, The article he produced, stated that  by 1975 there would be a possibility that 65,000 components on a single quarter-inch semiconductor.  It also stated that the number of transistors in a given integrated circuit doubles every 18 to 24 month.

Since then, a new law has been predicted for light emitting diodes (LEDs) due to their improvements over the years.

Named after the scientist Roland Haitz, Haitz Law, first presented in 2000  is a prediction of how fast LED chips will develop every decade. So far every decade, the cost per lumen falls by a factor of 10, with the amount of light generated increasing by a factor of 20. Haitz also made a forecast regarding the efficacy of LED lighting, with a prediction of 200 lumens per Watt by 2020.

Both Moore’s Law and Haitz law are semiconductor’s, therefore, it is a real possibility that there will be a continuing reduction of cost in the future.

So, are we on track to meet the predictions of Haitz law? 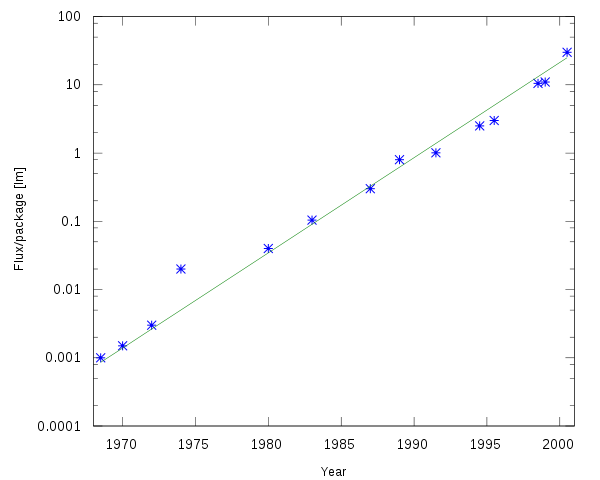 By Thorseth – Own work, Creative Commons

Using the graph above we can see the prediction since 2000. In the last couple of years, the average lumen per watt is 100. Luckily, more investment has been made by industrial and government resources so there are fast advancements for LED lighting efficacy. Hopefully, if the predictions are correct by 2020, there will be incredible savings of more than 50% of the electricity consumption with 200 lm/w. LEDs will be the most efficient light source by 2020.

There has been research where it has exceeded the 200 lm/w and perhaps by 2020 this will be commonplace for the led industry. We will have to wait and see; nevertheless, the future certainly seems bright for LED lighting.