Binning, in relation to LEDs is a practice designed to maximize effective utilisation in the production of LEDs. In LED production, a single round wafer is coated with materials to create a semiconductor which forms the ‘heart’ of the blue LED. This is then sliced into small rectangles, wire bonds are inserted and the phosphor is added as a coating within the enclosure. The whole thing is then encapsulated to create a finished white light LED. That coating process creates significant inherent variations that impact color temperature, lumens and voltage of the LED. The process is not capable of producing highly consistent and strictly controlled production of LEDs.

To combat this issue, manufacturers sort production into voltage, color and lumen bins. Light output and color temperature are the most critical bin criteria that impact product performance. To sort for light output, LEDs are individually measured and sorted by lumen output into prescribed ranges. LED suppliers create their own standard set of lumen bins and provide clear information on expected lumen performance for each of their ranges. The larger a bin size – the more variation you can expect around color temperatures and outputs – small bins have tighter control.

Manufacturers select only those LEDs that meet their acceptable performances ranges – Sedna Lighting have four performance ranges, which is higher than the average, many manufacturers have only two. Customers buying from manufacturers with more ranges can expect less variation in their products.

SDCM is an acronym which stands for Standard Deviation Color Matching- sometimes known as a “MacAdam ellipse”. A 1-step MacAdam ellipse defines a zone in the CIE 1931 2 deg (xy) color space within which the human eye cannot discern color difference. Most LEDs are binned at the four to seven step level, so you can often see color differences. The variable nature of the color produced by white light LEDs means a convenient metric for expressing the extent of color difference within a batch is the number of SDCM ellipses in the color space that the LEDs fall into. If the chromaticity coordinates of a set of LEDs all fall within 1 SDCM most people would fail to see any difference in the color. If the differences extend to a zone twice as big (2 SDCM) you will start to see a color difference. A 2-step MacAdam ellipse is better than a 3-set, and so on. The diagram illustrates a CIE color space diagram, where SDCM ellipses are shown at 10 times magnification. 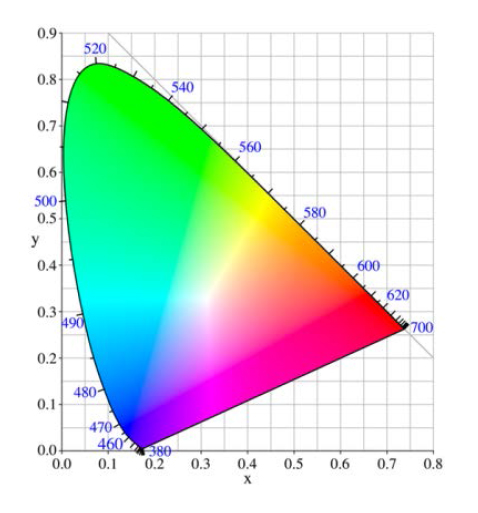