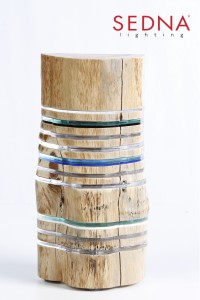 Sedna lighting tasked students at Cardiff Metropolitan University with a brief named ‘SEED project’. The aim of the project was to create an art piece combined with LED lighting in order to represent the ongoing concerns over global warming around the world.

Martin Lane, a second year Design student took on the task. This was Martin’s first project and took an environmental point of view from day one by looking at how much energy is used to produce one lamp.

Martin wanted to find the various elements from sources of waste in order to keep the carbon footprint as low as possible. Acrylic was sourced from cutoffs offered from a company, and being a lover of natural materials, he acquired a piece of wood for free from company that sells timber because it was not able to be sold due to the quality of it.

Attention was also take to the energy consumption of the production of the lamp. To cut the wood, a laser cutter was used, taking 25 minutes. This is the equivalent to one full kettle running for 1 hour. The rest of the sculpting was made with hand tools that took many hours to complete, but the effort was well worth it as the final result of the light sculpture is truly stunning and a great symbolism of the ongoing concerns with carbon emissions.

Due to the impressive skill, technique and creativity of the SEED project, the sculpture will be presented at the New Energy Cleantech Awards in London on 28th April 2016. More information can be found here: