Having a well lit room can make a significant difference to work and home life. If a room isn’t significantly lit, it can become a hazard, therefore a number of measure put in place to check the efficiency in the lighting industry, which is often referred to as the lifespan of the light.

When manufacturers state that the lifetime of an LED light, this can often confuse consumers about how long they really last. When it states that a bulb will last up to 25,000 hours, many people assume that it will die out and no longer work after this point. This actually means that over the course of time the light will start to fade and by the end of the 25,000 hours the light will be 30% less than it was originally. This is also known as lumen depreciation. After this time it is generally considered that the light is no longer fit for purpose. 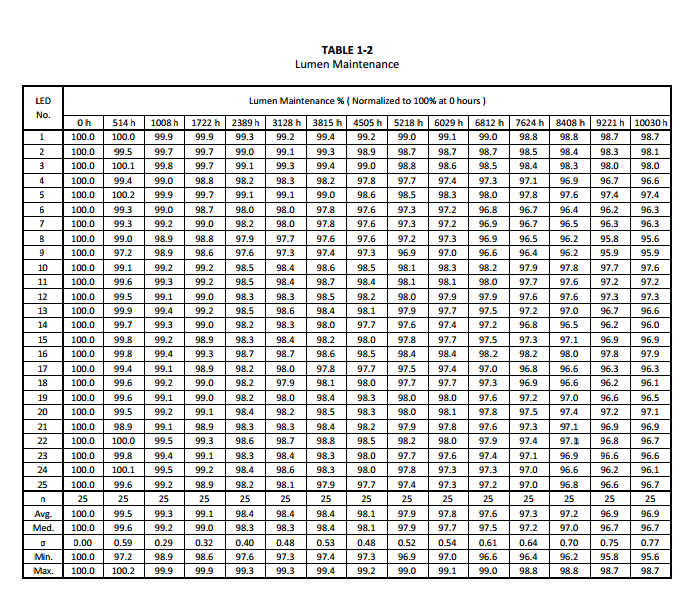 How are we able to measure the lifespan?

With traditional light sources, testing would involve using statistically valid samples tested at an ambient temperature of 25° Celsius using an operating cycle of 3 hours on and off. Once half the lamps in the sample have failed, this is the average rating for that lamp. For a lamp that has a 10,000 hour lifespan, it would take roughly 15 months to test an LED light. With the estimation of 50,000 hours, it would take a tremendously long time to test at 5.7 years. In addition to the time it would take, with the rapid technological advancements of LED lighting taking place, by the time it was fully tested it is inevitable the products will not be in use anymore.

What can affect the lifespan?

Another factor essential for this is the thermal maintenance of the lamps. Heatsinks are devices that allow the hot air to be pushed away. The heatsink is essential in order for the lights not to overheat. If the lights do not stay cool then they will not be able reach their full lifespan. If the heatsink is ineffective, the lamp will overheat and it will not be able to be used at the full capacity.

One important report is the LM-80, a Department of Energy approved method of measuring lumen depreciation. The LM-80 is a method for measuring the LED light source at various temperatures. LM-80 specifies a minimum testing period of 6,000 hours, with 10,000 hours being the preferred testing period.  LM-80 also requires testing at a minimum of 1,000-hour increments and requirements stop at 10,000 hours in order to allow for faster LED product development by light source manufacturers.

From LM-80 reports we can see where lumen maintenance is higher at higher temperatures which results in a shorter lifespan.

Overall, we can see that the actual LED light is having a longer lifespan, however, it is equally important to have an effective heatsink in order to maintain a reasonable temperature for the lamps to last as long as they are supposed to.