Since LED lighting was invented, it has evolved over time to become one of the most cost effective and energy efficient lights around. Here is an explanation of the different types of chips used in the LED products used around the home as well as in commercial spaces.

DIP (Dual In-Line Package) LEDs are the traditional LED lights. It is what most people think of when they picture LED lights. They look the most like a traditional light with the chip encased in hard plastic generally used with 2 straight parallel connecting pins.

Although DIP chips are still used today, they have a much lower efficiency than the newer LED chips which are used for modern day applications. You are most likely to see these chips used in electronics.

An LED DIP chip will typically produce around 4 lumens per LED, much less than the newer chips. 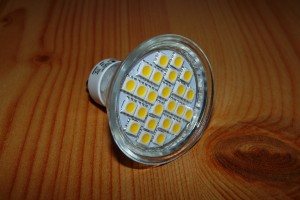 SMD stands for Surface mounted diode and are much smaller and efficient LEDs than the previous DIP chips. They have become popular due to their versatility and are typically mounted and soldered onto a circuit board. SMD chips have become very important for the development of the LED industry as 3 diodes are able to be put on the same chip.

As well as the brightness being significantly better, they have the capacity to change colour. Some of the chips are made small in order to be used in high end electronics such as laptop computer indicator lights.

These SMD chips can produce between 50 and 100 lumens per watt. Which is significantly better than the DIP chip. 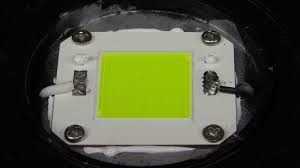 COB (Chip on board) LED is a high powered chip which is the most recent development in LED lighting. Similarly to SMD chips, the COB LED has multiple diodes typically around 9 or more.

COB chips are being used in an array of different devices. Typically in small devices such as cameras and smartphones, this is due to a high amount of lumens created for a very small amount of energy

Before the LED COB chip, the use of floodlights were not considered to be a standard form of lighting, however, high power LED floodlights and spotlights are now commonly used.

Although there are different forms of the COB chip, they can offer a much higher amount of lumens per watt which can often be well over 100.

More more information on our products  Get in touch and we’ll be able to advise.